Broached Commissions isn’t your average design outfit. The clue is in the name: this is design that wants to broach difficult conversations, to tell unheard stories and reflect our history back at us in unexpected ways. Since it was founded in Melbourne in 2010, Broached Commissions has been making the argument that design can transcend pure function: that in the creation of creatively inspired, historically informed objects and furniture, we can find the common threads that bring us together.

“When Broached Commissions began, we had quite a narrow purpose,” explains founder and creative director Lou Weis. “We simply wanted to investigate how Australian design has evolved by looking at tumultuous moments in our history. But as time went on, we realised that we were filling a real need in Australia for specifically gallery-focussed objects and furniture, for work that stands alone and is capable of telling its own story.” 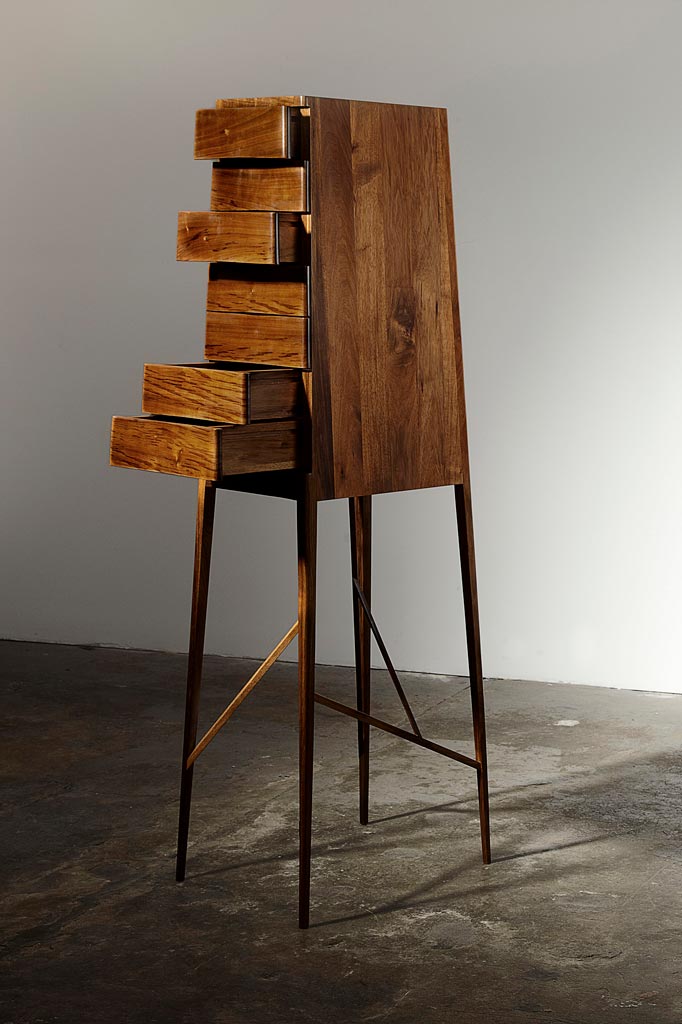 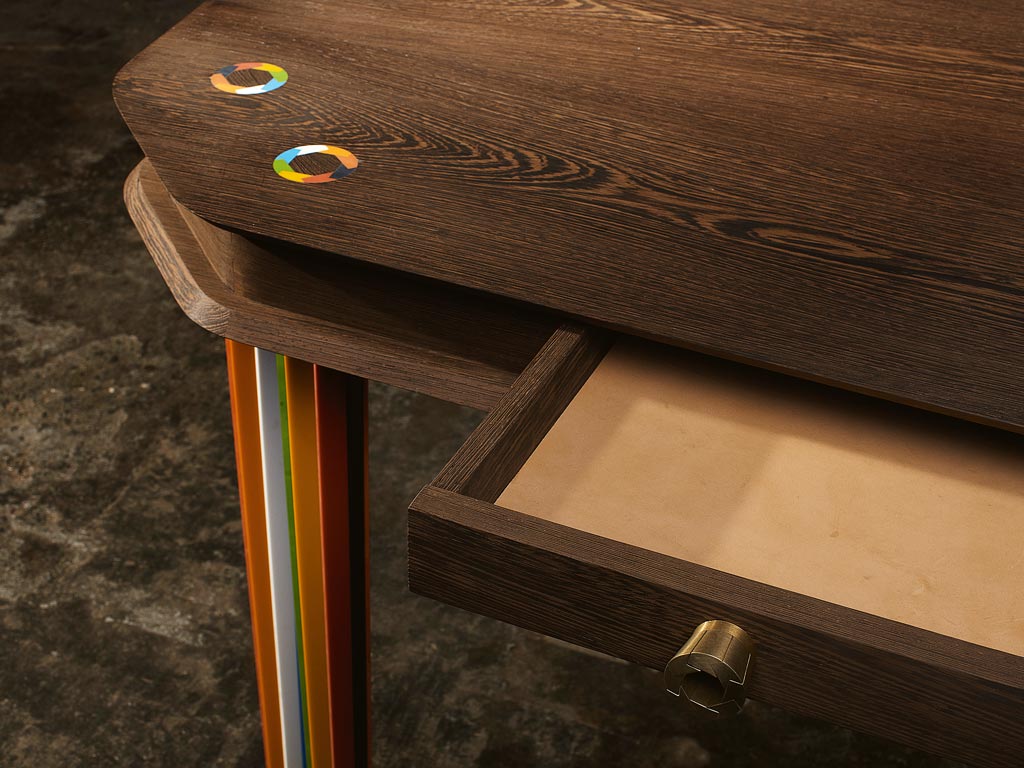 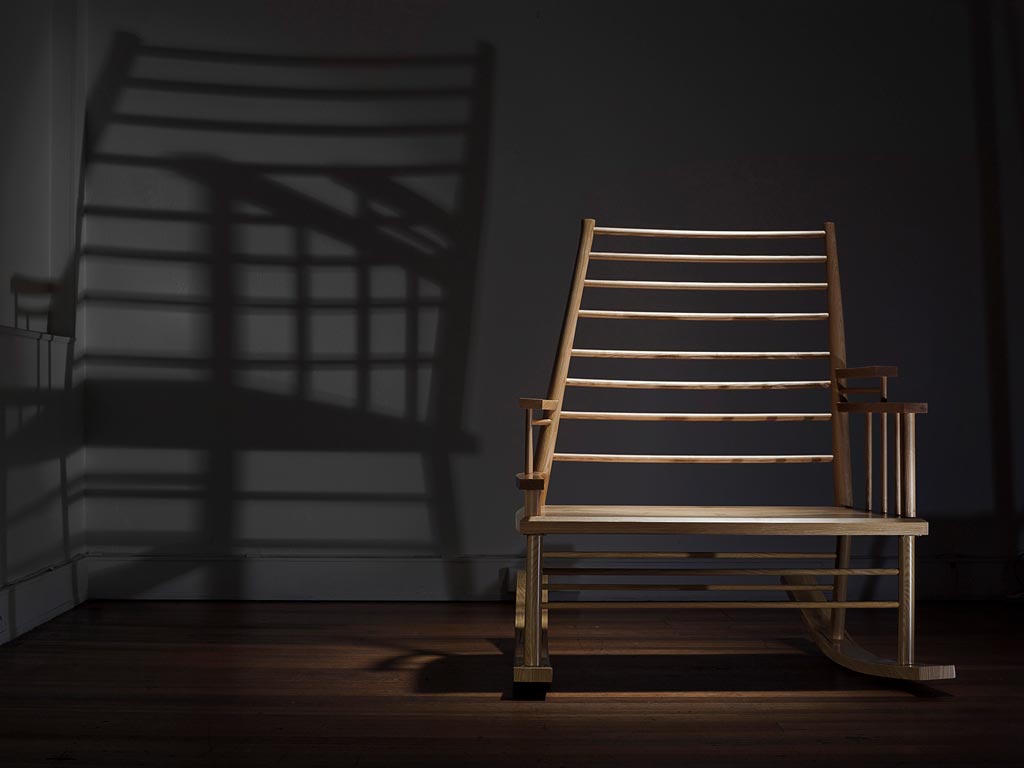 “Of all our design houses, Broached Commissions has probably been the most successful in advancing the idea of narrative-driven design,” says Ewan McEwan, NGV’s senior curator of design and architecture. “The past 15 years has seen such a rapid acceleration in the commercial aspects of Australian design, so it’s more important than ever to acknowledge this deeper layer of the craft and to start expanding the meaning within the work.”

What really sets Broached Commissions apart from its peers is the research that underpins its practice. “The closest parallel is probably filmmaking,” says Weis. “But rather than the screenplay we have a curatorial essay.” Working in conjunction with local historians, these essays become the ‘bible’ of the collection, a resource that each of the contributing designers will use to facilitate the evolution of their work. “In the realm of object design, that’s pretty much unheard of,” adds Weis.

Broached Commissions set the template with its very first project, Broached Colonial, a reflection on the arrival of British colonisers in Australia. A collaboration with the art historian John McPhee, Broached Colonial saw Weis and his team working with acclaimed local and international designers, including Trent Jansen, Chen Lu, Max Lamb and Lucy McRae, to create a suite of furniture pieces that channelled the “wildness, brutality and resourcefulness” of our early history. Later commissions have included Broached East, an exploration of Asian immigrant experiences in the time of the gold rush, and Broached Monsters, Jansen’s investigation into the mythologies that European settlers created from Aboriginal people’s own stories of strange and wondrous creatures.

The common thread running through all these projects is the immigrant experience. For Weis, the son of a German-Celtic mother and a Polish-Jewish father, whose family fled to Australia in the shadow of the Holocaust, it’s impossible to think about the idea of local design without considering the migrant flows that have bought us to where we are today. “Australia is a modern country, so it’s defined by its continuous remaking through wave after wave of migration. And I’m a product of that globalised mentality. I represent that classic, mongrel Australian blend, where it’s moved beyond the racial tribe and into the marketplace of ideas.”

Weis believes design’s power lies in its capacity to use newly unfamiliar objects to reframe the Eurocentric story of these cultural shifts and tell them from the perspective of those who actually made the journey, or felt its brunt. “What’s much more important than the collecting or sale of our work,” he says, “is the conversation we hope to have around the impact that globalisation has had on Australia’s Indigenous communities, as well as the generations of migrants who left behind their own national traumas to come somewhere they felt safe.”

Design Storytellers will draw from and expand upon Broached’s major commissions to date, as well as debuting Broached Exceptions, an entirely new collection of woven glass objects from LA designer Mimi Jung that draws on her family’s migration from Korea to the USA in the wake of the Korean War. “The whole exhibition is grounded in a conversation about globalisation from different perspectives across different times,” explains McEwan. “It's a fascinating conversation about the importation of European ideas into Australia and the ongoing ignorance of both local materials and the existing culture of our Indigenous people.”

For McEwan, Design Storytellers represents a watershed moment in Australia’s relationship to its own design aesthetic. “I’ve spent my entire career in design,” he explains, “and right now you can see how much the ambition and complexity of work is increasing across the board, both in terms of the objects themselves, but also the ideas that these objects are trying to articulate. Australian design is finally taking on that artistic mantle and I think that’s genuinely exciting.”

Luke Ryan ( @lukeayresryan) is a Melbourne-based writer, who covers topics as diverse as art, technology and politics.