Chef Scott Pickett oversaw one of the most successful restaurant launches of 2018. He sat down with Carrie Hutchinson to reveal the lead-up to the opening of flaming hot Matilda.

For weeks before the doors opened, residents of South Yarra had peered through the glass trying to catch a glimpse at what Scott Pickett might do next. For the first time, the normally northside-based chef – he also heads up Estelle Bistro in Northcote and Saint Crispin in Collingwood – was venturing south of the Yarra and anticipation was high for the June opening. Now, with two hats under the team’s belt in the recent Good Food Guide 2019 and a legion of quickly established fans of Matilda’s fire-fuelled cuisine, Scott looks back at planning and lead-up to one of Melbourne’s openings of the year.

AN IDEA IS BORN

“The idea really came about seven or eight years ago,” he says. “I went to the wedding of some really good friends in Buenos Aires and they took me to this ramshackle, rustic asador. There were all these fire pits and low grills. But I really loved the whole fire, smoke, cooking-over-flames thing.”

It wasn’t a technique, however, that could be easily adopted at any of his other venues. Then, about three years ago, the owner of this site – opposite the Royal Botanic Gardens and below the future home of new hotel, United Places – approached Scott then persisted when his initial approaches were politely rebuffed. “The more I looked at it, the more I thought this concept and idea would fit really well here,” says Scott.

Plus, there was the added bonus of being able to create a venue from scratch, rather than retro-fitting an existing restaurant. “We were involved before they even broke dirt,” he explains. “We could work on the extraction, the safety, the air conditioning, the whole thing, then designed something around what I really wanted to do.”

He worked with the team from Projects of Imagination, on the design, which was a huge deviation from the usual format for a restaurant.

Instead of having tables just inside the window, the kitchen has been moved to the front of the room. “I didn’t want the kitchen at the back because that wouldn’t capture what it is. We wanted the sense of walking through the kitchen.”

Of course, in the planning stages, there were some who doubted the flip would work. “Aside from the core three of us [Pickett along with Dion Hall and Chloe Lanser from POI], everyone else said, ‘You’re mad. What are you doing that for?’

“It probably worked out better than even I thought. Not only do you smell the food, but you see the food and hear the food – the duck crackling in the wood fire, the smoke going. It’s a really sensory experience and you start to salivate as soon as you arrive.”

There’s also a 15-metre-long timber bar here, which offers pairs of diners or those eating solo a little bit of culinary theatre to enjoy with their meal. 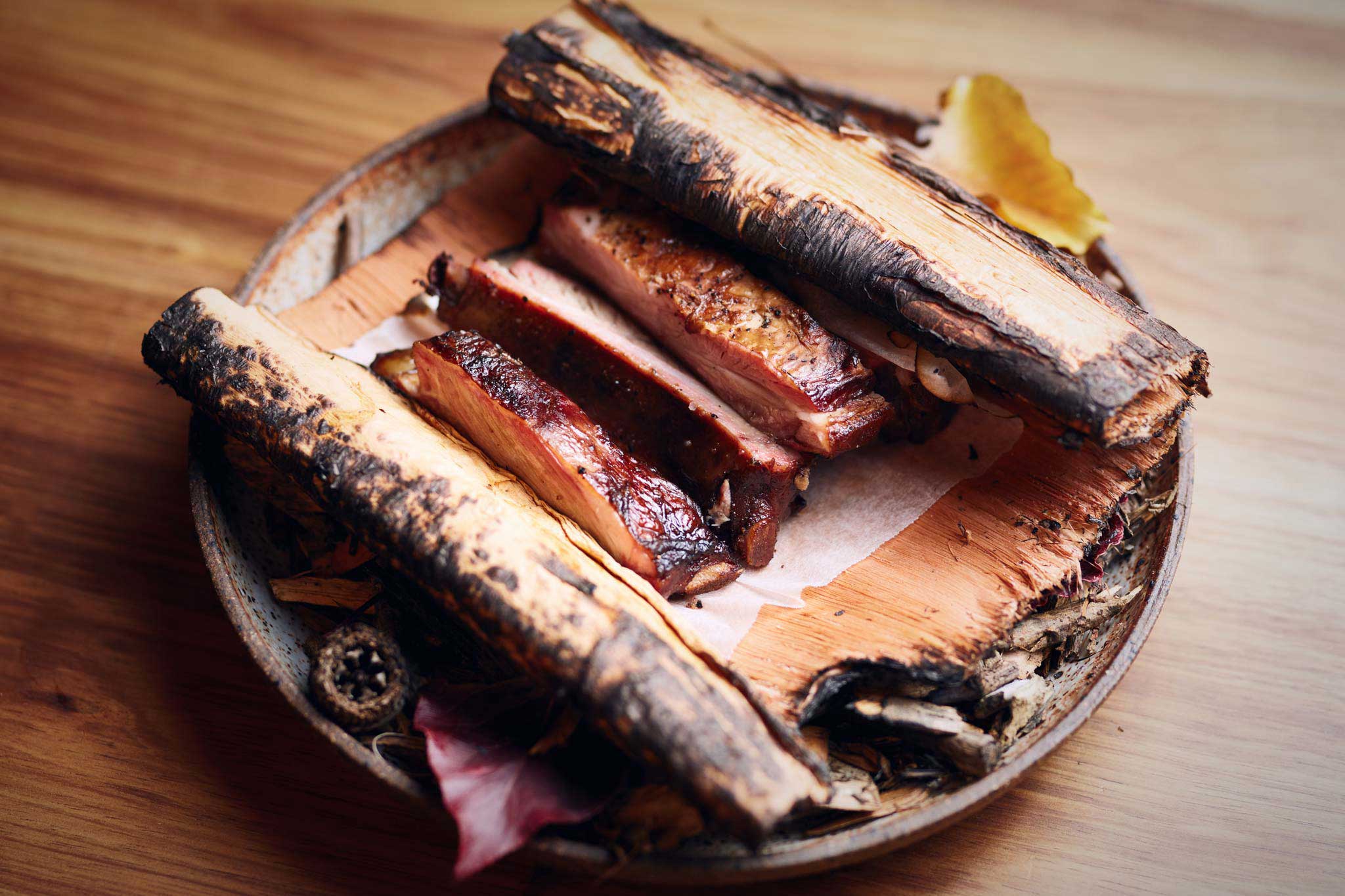 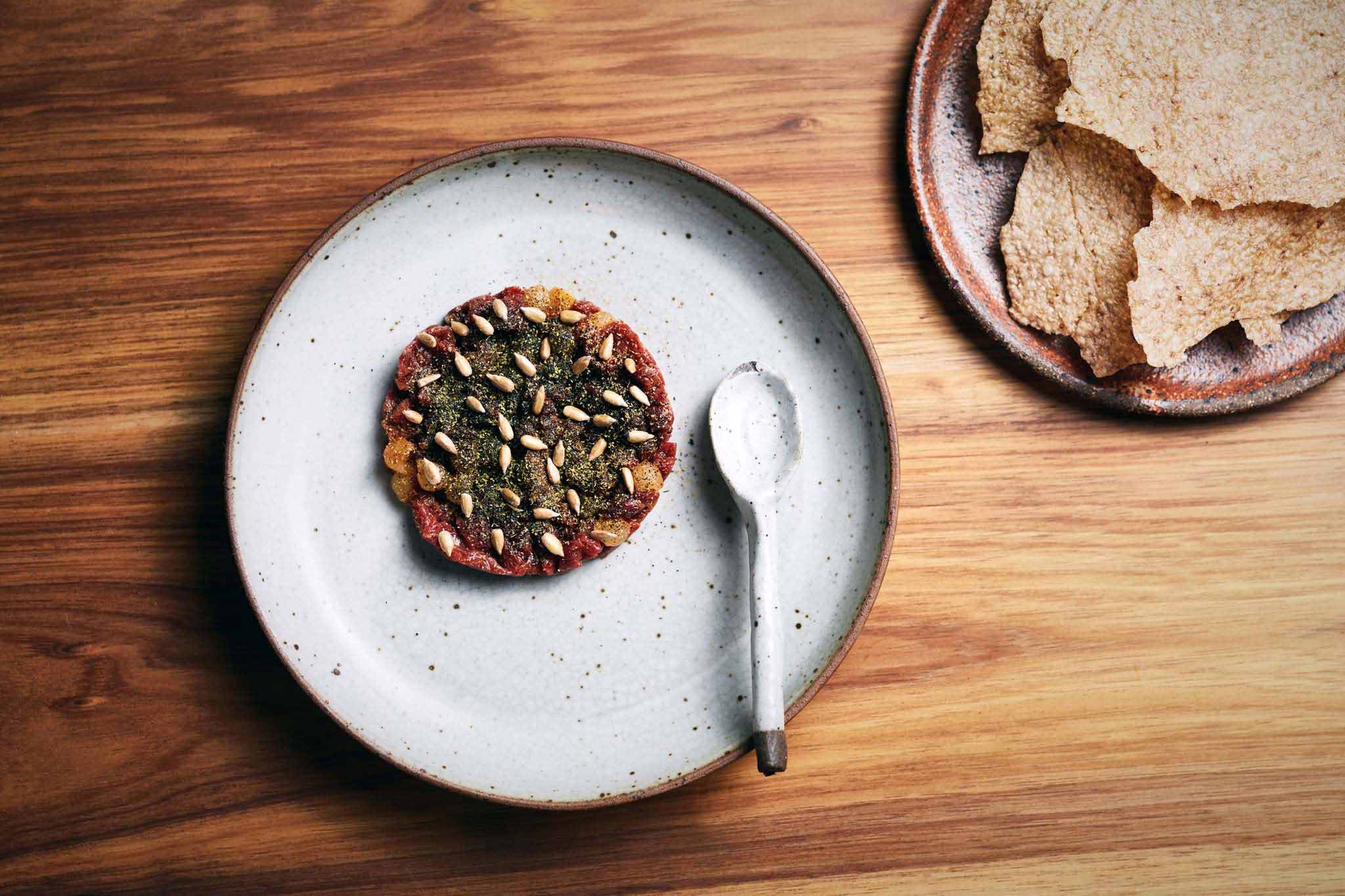 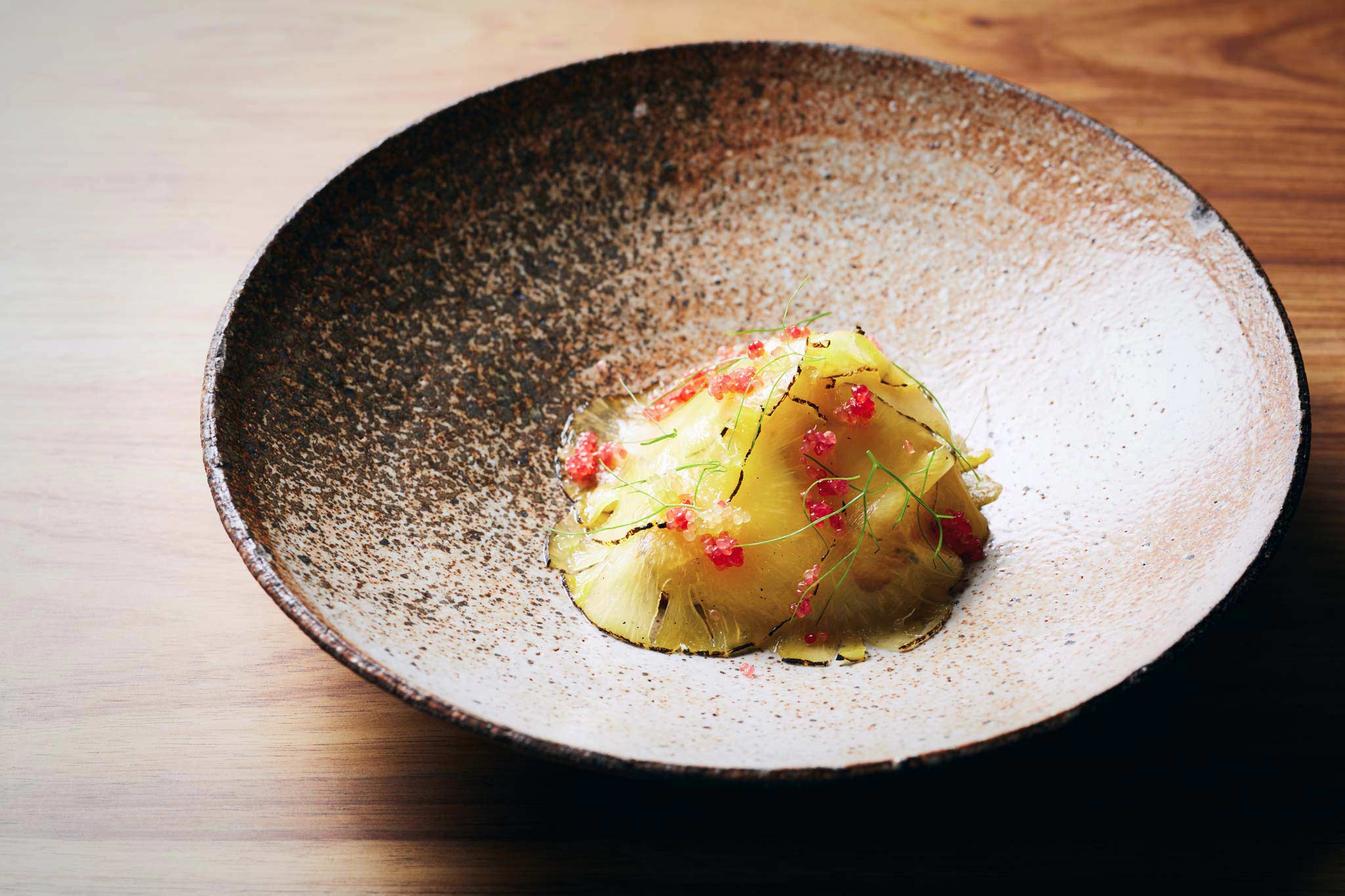 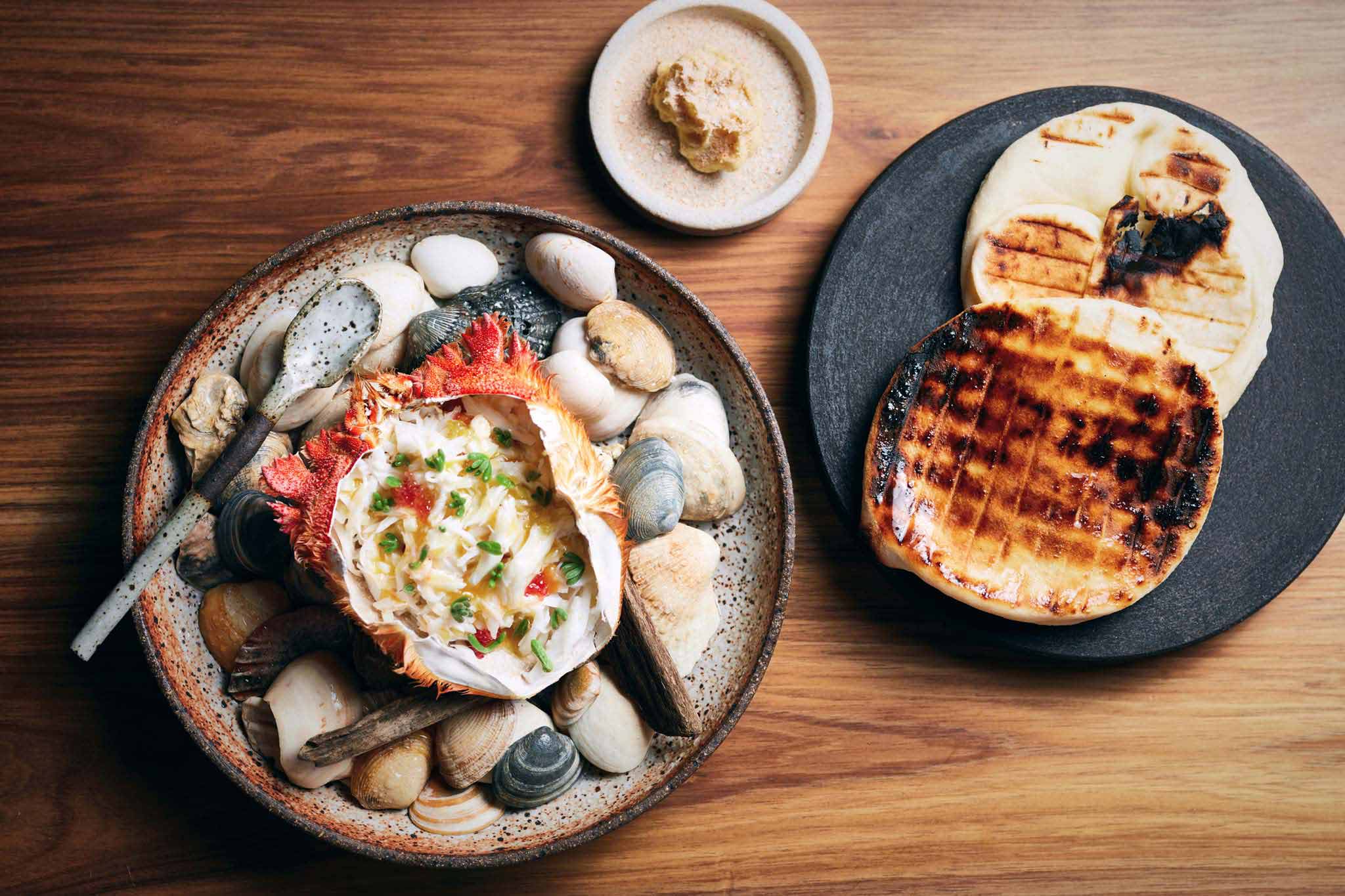 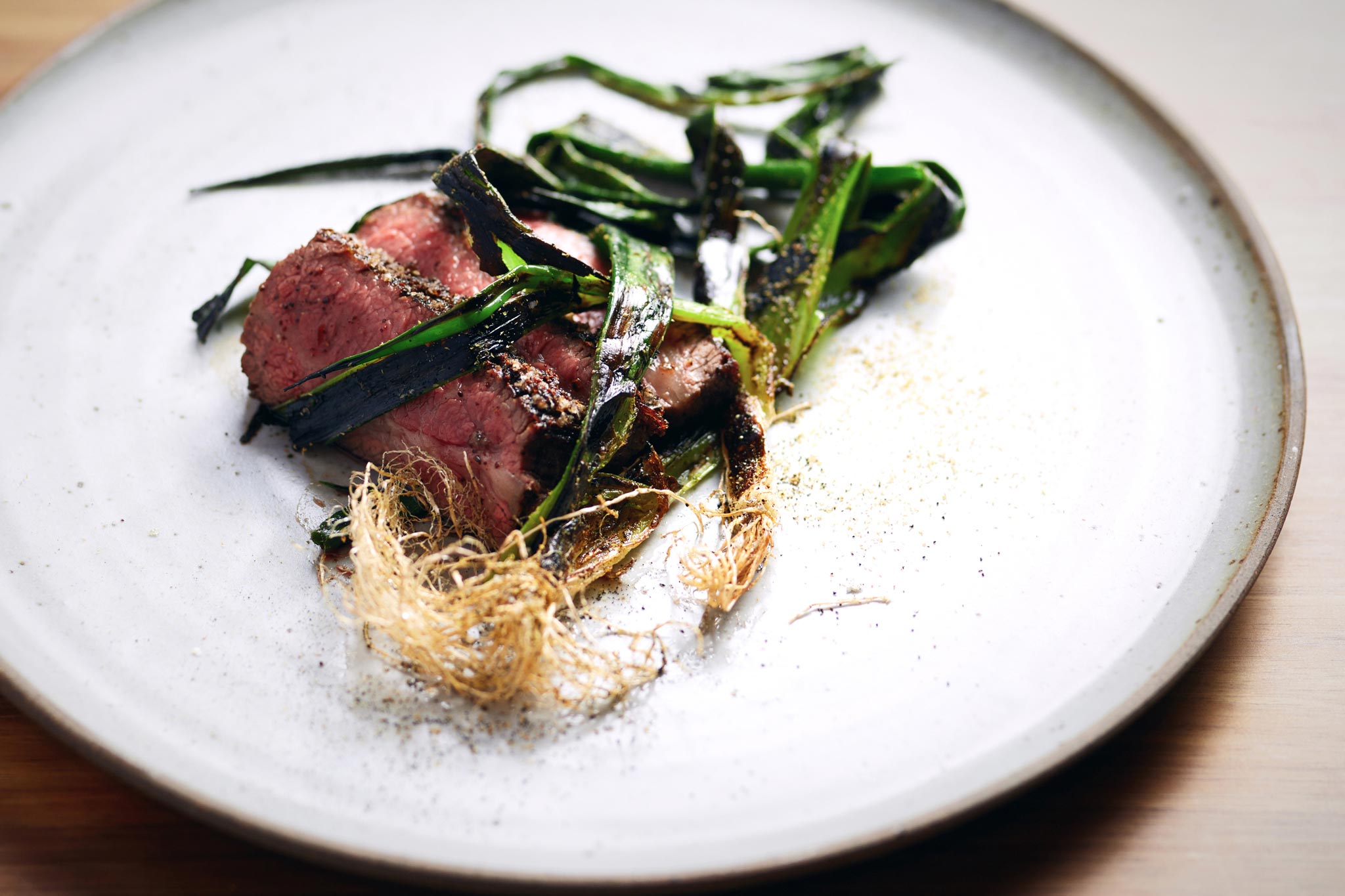 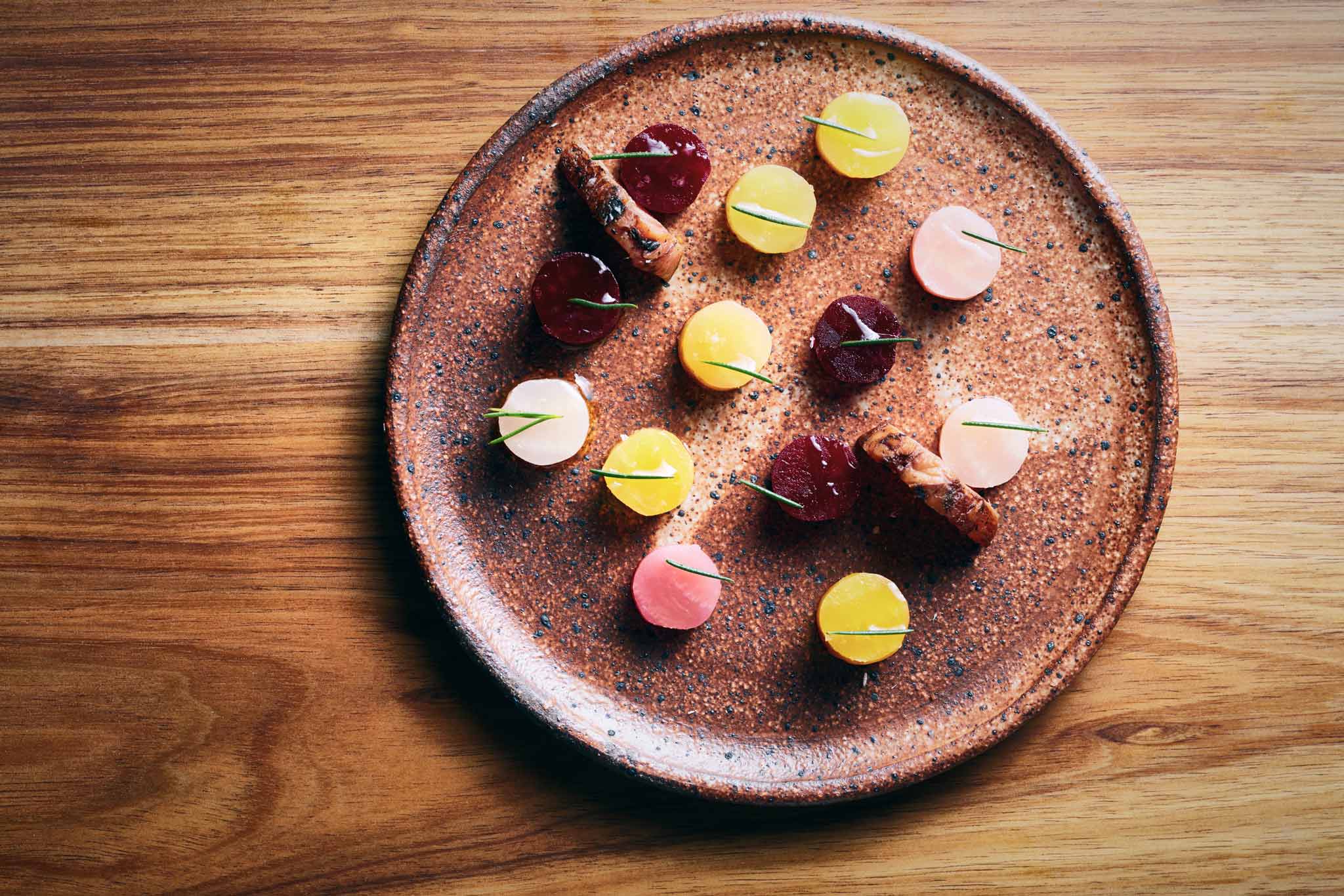 At one point, in the planning of the kitchen, Scott and the designers did talk about having gas cooktops alongside the wood-burning ovens and grills. But the idea was nixed.

“The more I thought about introducing gas, the more I thought it was an easy way out,” he explains. “We were starting out on an adventure and a whole new way of cooking for us, so if we removed that straight away, we were removing the safety net and learning to cook exactly how we should in this type of restaurant.”

To master the art of cooking with fire, the entire kitchen unit was installed in an empty warehouse about six months before the restaurant was due to open. Three chefs from the team set themselves up there full time.

“We developed the menu for that six months,” says Scott. “We made a connection with the fire I suppose, then that began filtering through the food.”

Ironbark is the mainstay, but the chefs also experimented with cherry wood, apple wood, apricot wood and pinot vines to see how they burned and the flavours they might impart: “Cherry wood goes really well with the duck, for instance.”

Everything on the menu is licked by the flames in some way. Of course, steaks are a menu favourite, but often fire and coal is used in far more subtle ways: oysters are topped by a crust of smoked bone marrow, a dish of spanner crab comes with a charred flatbread, tarte tatin is served with a smoked vanilla-bean ice-cream.

“The food is a lot simpler than what we cook in the other restaurants, but what we have here is the luxury of the flavour profiles from the wood and the smoke and the charcoal.”

The wine list is a showcase for Australian drops, from big South Australian reds to lighter chardonnays and rieslings. “There’s a bit of Old World too, but we wanted to be as Australian as we could,” says Scott. 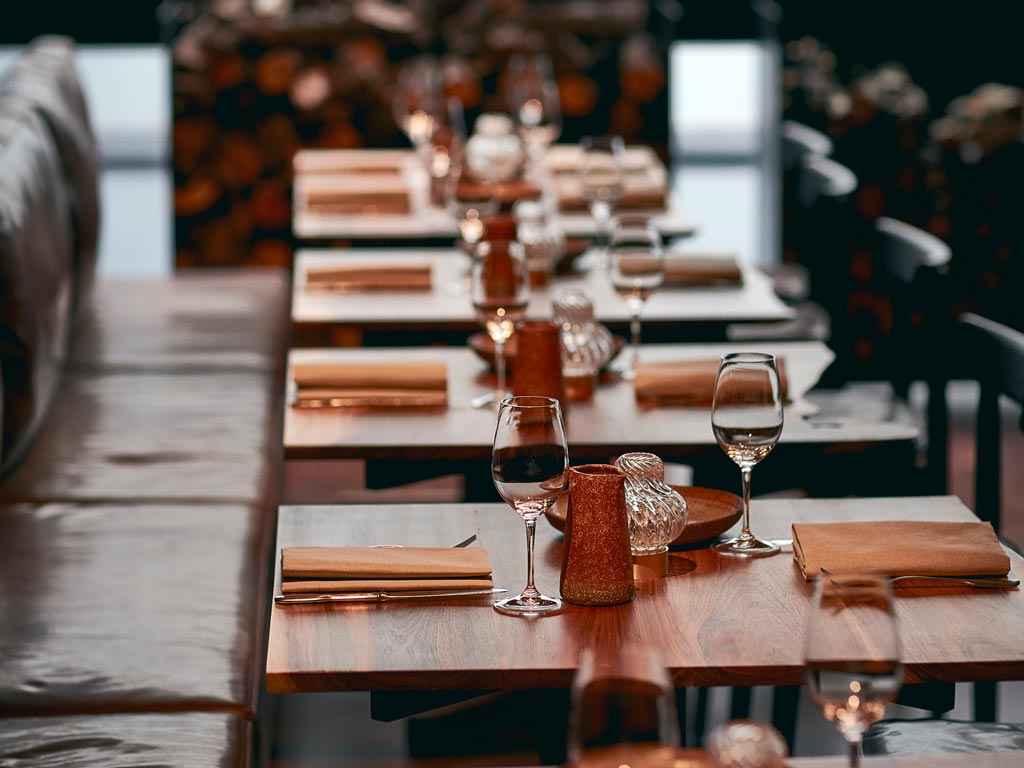 The tables created by Hugh Makin. 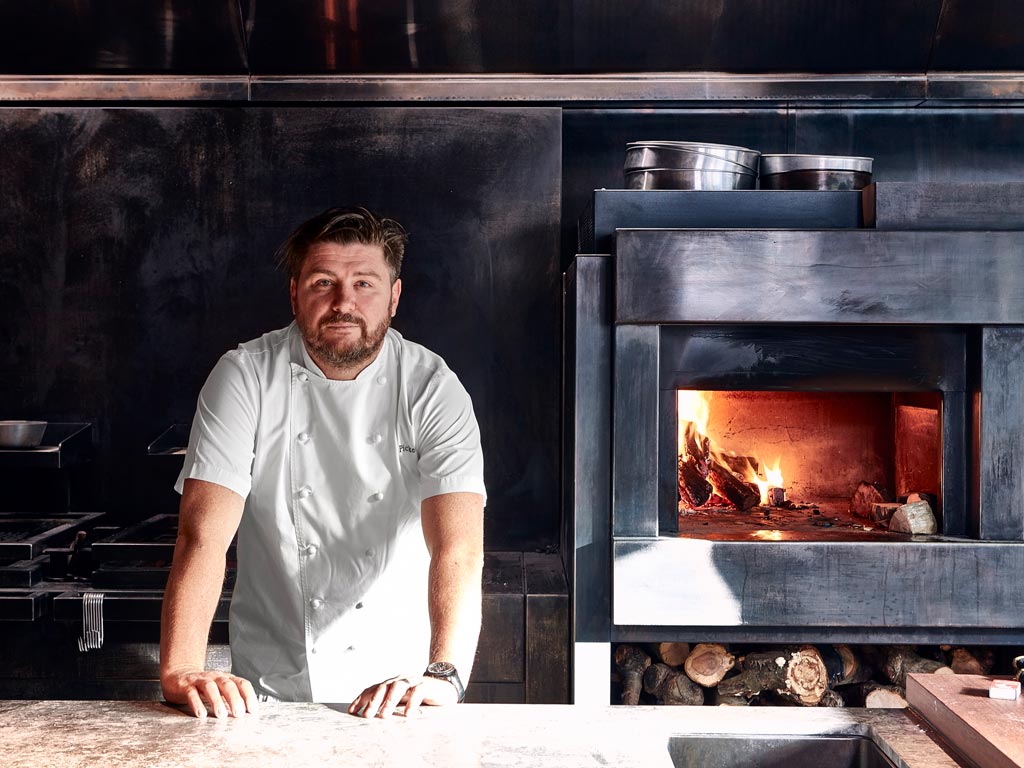 Scott Pickett in front of a wood-fired oven. 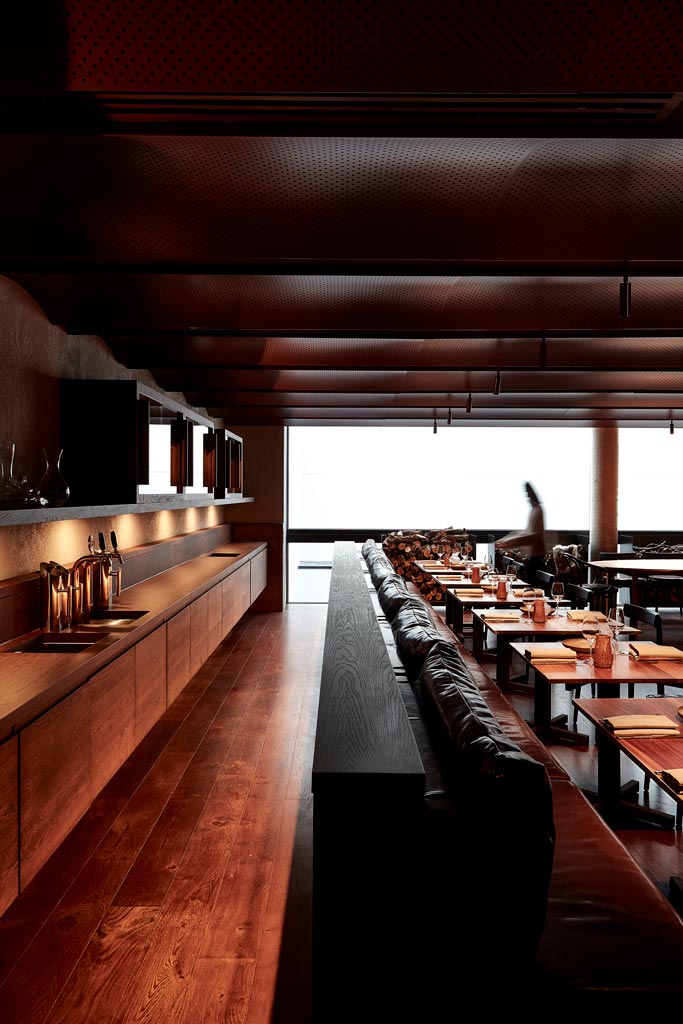 Matilda’s vaulted ceiling mirrors that of a wine cellar.

Pickett worked with a number of local makers and craftspeople to finesse the details of Matilda. A line of tables, backed by one of the most comfortable banquettes in all of Melbourne, was created by Hugh Makin, a Castlemaine carpenter, using the timber from a single tree. “I went to visit him and we decided how we wanted the wood to sit and worked out that it would be a table for two, then four, a two, a two, a two and a four then we cut it into lengths,” explains Scott. “And we kept the natural edge all the way along.”

Eighteen months before the restaurant was open, he began working with Andrei Davidoff on the plates. The hand-blown table lights were crafted by Mark Douglass.

All there was to do was open the doors. A cocktail party on Tuesday was followed by a sit-down dinner for family and friends on Wednesday. “Thursday we were closed to sort out any issues, then on Friday we went live,” says Scott. And it went live with a bang. Social media and pre-launch PR meant everyone knew it was happening. Looking back, the opening and the time since has been a huge success, winning accolades from critics and love from diners.

“My proudest moment was when it all came together really, really well. It seems as though it’s seamless, but the more preparation you do in the two or three years leading up to it, the better the result will be.”